"Discover Starfield, the new space epic currently in development by Bethesda Game Studios. Starfield is the first new franchise in twenty-five years from the acclaimed developers of The Elder Scrolls and Fallout series." ― Description

Starfield[2] is an upcoming first-person role-playing single-player space-themed adventure game developed by Bethesda Game Studios and published by Bethesda Softworks. The game was formally announced during Bethesda's E3 Press Conference in 2018. The game is described as a wholly new, next-generation first-person experience set in an entirely new space-themed world. A short teaser trailer was shown with few details.[3]

300 years into the future, embark on an epic journey amongst the stars to answer humanity’s greatest mystery.[4]

Starfield was originally trademarked on the 13th September 2013.[5] The game, however, was not formally announced until E3 2018 alongside The Elder Scrolls 6. Todd Howard confirmed that Starfield has moved out of pre-production and is in a playable state.[2] Howard further said, "We've [Bethesda Game Studios] been talking about it for a decade, we started putting things on paper five, six years ago, and active development was from when we finished Fallout 4, so two and a half, three years."[6] Bethesda maintains its own internal wiki for Starfield, to which all of their employees have access. These include histories, backstories, and starship architecture.[7]

In September 2020, Microsoft announced its acquisition of the parent company of Bethesda Game Studios, Zenimax, for $7.5 billion. This is the second most expensive acquisition of all time, second only to Tencent's buyout of Supercell in 2016 for $8.6 billion.[8] On March 8th 2021, the acquisition was approved in the EU.[9]

Space travel is considered "dangerous" in the sense of flight in the '40's within the game and inspiration has been sought from Elon Musk's SpaceX program.[2]

On February 23rd 2021, Bethesda Game Studios announced a charity auction for Make-a-Wish foundation where the prize was the opportunity to design a character for the game. The auction was won by an unknown bidder for $15.4k.[10]

Into the Starfield - The Journey Begins

Into the Starfield - Ep1 - The Endless Pursuit

Into the Starfield - Ep2 - Made for Wanderers

Into the Starfield - Ep3 - The Sound of Adventure 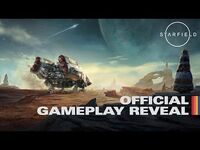 At release, Starfield will have 100 star systems and 1000 planets available to explore. Mechanics include crafting, base/ship/avatar customization, and unlockable skills.[13]

The major features in Starfield are:[13]

The Spacefarer, when having their record located by Argos Extractors, is able to have a variety of pre-defined backgrounds:

The planet shown in the teaser trailer 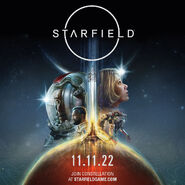